With all its lights and energy, shows, museums, restaurants, and tours, New York City will stimulate and entertain even the most disinterested of teenagers. Here’s how we spent a few action packed days during February break in New York City.

After an early check in at our hotel, we walked a few blocks to Rockefeller Center for a tour of NBC Studios. The highlight – seeing the Saturday Night Live set and learning how much of what we see on TV is an illusion. Dinner in Greenwich Village followed by an after dinner stroll through Times Square and a visit to Apple’s flagship store on Fifth Avenue.

After energizing ourselves with lattes from Ninth Street Espresso and crepes at Bar Suzette in Chelsea Market, we walked the High Line. The High Line is an elevated railroad bed turned into park and walking path along the lower west side of New York. Instead of walking on the streets between the buildings, we walked above or among them, seeing the city from a different perspective.  Lunch was consumed at a deli before a 2 p.m. Broadway show (“Wicked”). Dinner was followed by cupcakes at Magnolia Bakery.

After going through airport-like security, we boarded the 9:30 a.m. ferry to Liberty and Ellis Islands (buy your tickets in advance and arrive plenty of time before departure). Although the Statue of Liberty is closed for renovations, we were able to walk around Liberty Island while listening to an audio tour and learning why the French gave the U.S. her gift. On Ellis Island, our audio tour taught us about the many trials and tribulations of immigrants arriving in New York during the first part of the 20th century.

Back to Manhattan, snacks from a street vendor and a quick walk to the 9/11 Memorial (tickets are free but must be reserved in advance) where we waited in line to remember and to reflect.

Day 4: Museum of Modern Art, Tour of the UN, Dinner on the Lower East Side.

After a leisurely morning and late breakfast, we headed to the Museum of Modern Art (MOMA), a short walk from our hotel. We took another audio tour (this one was free with admission) and browsed art by Monet, Picasso, Chagall, Rousseau, Cezanne, Matisse and many others, learning about a few of the artists’ techniques and inspirations and pondering what actually makes art. Then across town to the United Nations Headquarters where our tour guide, a young man from Peru, took us into the Security Council Chamber and the General Assembly Hall. Fascinating for all of us but especially for my kids, who both participated in Model UN during middle school. After a quick dinner, we headed home to our small town a few hours away, happy but exhausted from a few days in the Big City. 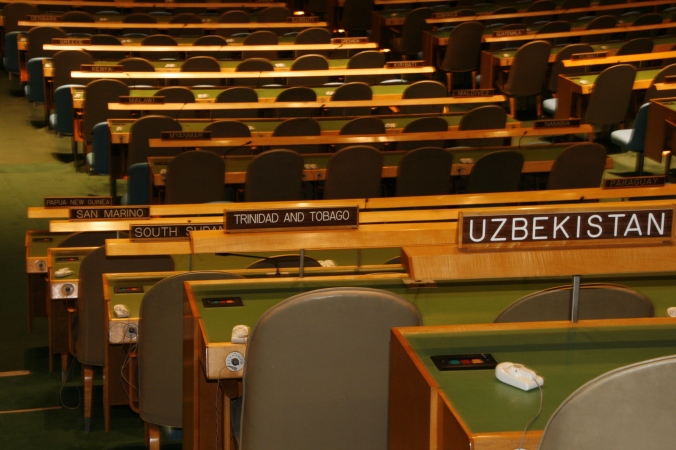 Getting there. Whether you fly, take the train, bus or drive yourself, allow plenty of time to acclimate to the hustle and bustle once you arrive before any scheduled tickets or tours. We found a great online deal and parked for $16 per day in a garage on 38th and 1st, much better than the $56 a day our hotel was offering. For parking deals before you arrive, check out Trip Advisor’s parking website guide.

Staying there:  Staying in NYC is not cheap, but there are many options and many promotions or deals. This trip we stayed at the Marriott Residence Inn, only a short walk to Times Square. The hotel’s price included two bedrooms, a sitting area and kitchenette plus a large buffet breakfast.

2 thoughts on “New York, Two Teens, Three and a Half Days”