Back from another game drive, I warmed my hands on a mug of tea. Others were drinking wine; the kids, hot chocolate. We sat around a fire in a boma or enclosure, waiting for dinner to be served at the game lodge.

Conversation was interrupted as the land rovers returned. The lions were on the hunt. Would we mind being late for dinner? Adrenaline rushing, I left my drink behind, ran to the trucks and hopped on the one in front. I covered my lap with a wool blanket as others clambered aboard with me. As we drove away, I saw the rest of my family in the truck behind.

The drive was fast and brief, the lions were near the rangers’ camp. We stopped short, and as our driver, Ginger, shone the spotlight around the bush, we saw only the hunt’s aftermath, a hyena hanging out; a lion licking its paws, bloody from the cape buffalo who got away; a few cubs playfully running in the dark. 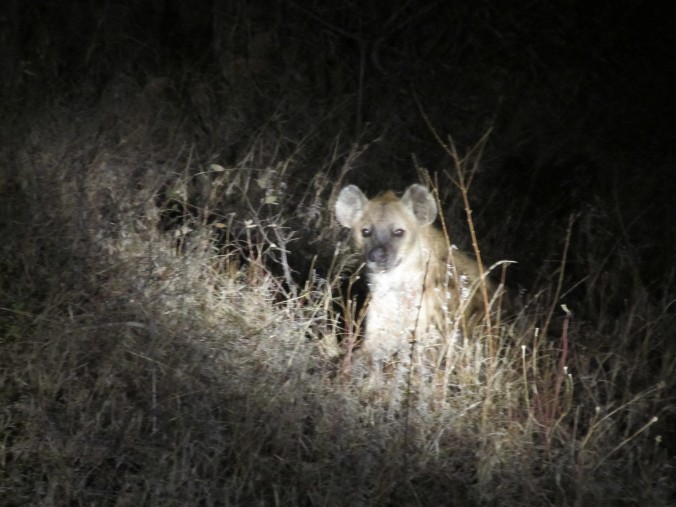 Our hearts pounding, we returned to the lodge, wishing for more, but happy with the thrill. As I jumped off the truck and began walking into the boma, I was stopped. Rhinos were spotted in camp while we were gone. I needed a chaperone and a flashlight.

Escorted to our hut, we grabbed what we needed then headed back for dinner, hearing the sounds of hyenas on our way. Exhilarated, we sat on benches around big tables, sharing food and wine with guests from Australia and London and locals who work at the lodge. Laughter and stories were easy that night, and we slept well, ready for another day of adventure on safari.

Photos on this post by Tommy Taft on trip taken in August 2011.