Six months ago we were in South Africa, and two weeks ago we were there again, as we watched and listened to the Soweto Gospel Choir in Boston’s Symphony Hall on February 12.

The New England audience was staid at first, barely swaying or tapping to the beat as the choir sang and moved in brightly colored costumes to the syncopation of two djembe drums at stage left. Their voices blended and melded as the 15 or so men and women sang traditional African songs as well as more contemporary American spirituals including, “Shosholoza,” “Bridge Over Troubled Water,” “Many Rivers to Cross,” and “Swing Low.” 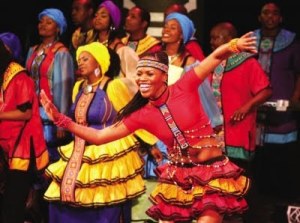 By the middle of the second act, the almost full house was rid of any inhibitions and the audience was standing, clapping and waving their arms as the dancers jumped, flipped and kicked, the drummers beated, the singers crooned and trilled, the choir harmonized.  As the music slowed, the audience swayed to the sensual sounds and lyrics of “Arms of an Angel,” a performance which inspired its own standing ovation.

With a tribute to Miriam Makeba, the choir ended the second act with “Pata Pata” bringing the audience to their feet, its clapping ceasing only when the drums and the melodies began again for two encores.

Since the Soweto Gospel Choir was formed in 2002 to celebrate inspirational African gospel music, the group has won three Grammy awards for their albums “Blessed” and “African Spirit” and for Best Movie Song “Down to Earth,” from the movie “Wall-E,” a collaboration with Peter Gabriel. The choir has performed all over the world for various dignitaries and with many leading performers.